Watch: Sterling pen appeal denied after getting clipped by Robertson 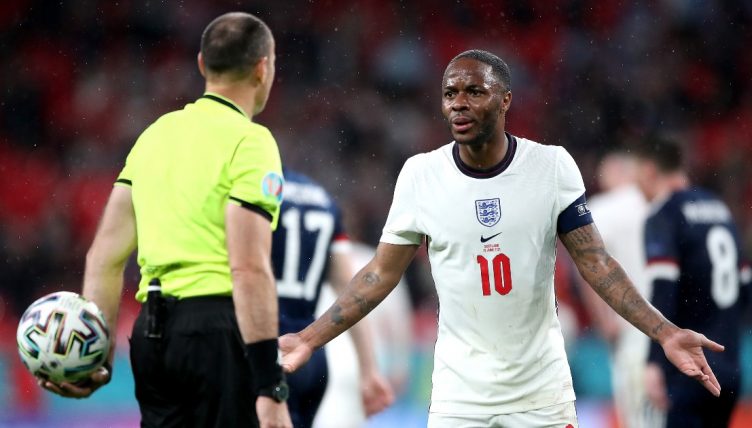 Raheem Sterling and Andy Robertson are two players that know a lot about facing one another, given Liverpool and Manchester City‘s title tussles in recent seasons.

The rivalry resumed on Friday night, on the international stage, as England hosted Scotland in the Euro 2020 group stage.

Given the historic rivalry, there was plenty of hype – and talk about that Gazza goal – as the two clubs met for the first time in a major tournament in 25 years.

John Stones and Che Adams each had chances to score early on. Stones blocked a shot from the Southampton striker after just three minutes before heading onto the post.

From there, things got a little cagier, but it was an absorbing and competitive goalless draw. The point keeps Scotland’s hopes of reaching the last 16 alive, while England edged towards the knockout stages after their win over Croatia in the opener.

But England feel that they might have had a match-winning penalty in the closing stages, when Robertson appear to slightly catch Sterling. Lee Dixon in the ITV commentary booth thought there was something to it, while predictably Ally McCoist disagreed – as did former referee Peter Walton, and the officials at Wembley, with barely a pause for any VAR checks as play resumed.

It’s fair to say this one would have been extremely soft.

Should #ENG have been awarded a penalty there? 🤔

Peter Walton thinks the referee got the decision spot on – but what do you reckon?#ENGSCO | #ITVFootball | #Euro2020 pic.twitter.com/fypFu7tfrK