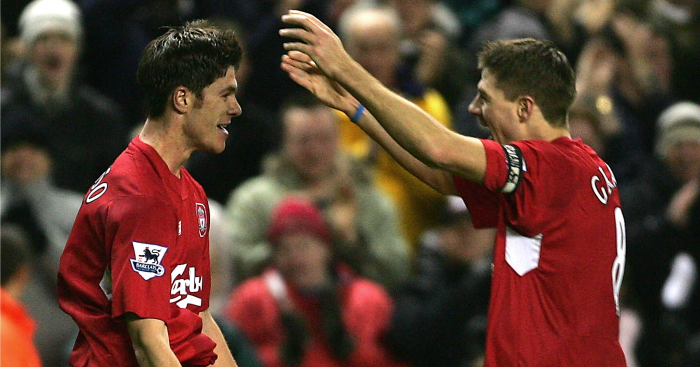 Steven Gerrard has sent Xabi Alonso an emotional video message ahead of his former Liverpool team-mate’s final appearance before retiring.

Alonso joined Liverpool from Real Sociedad in 2004 and went on to form a formidable midfield alongside Gerrard, with the duo helping the Reds win the Champions League and FA Cup, while they also came perilously close to winning the Premier League in 2009.

That proved to be his last season at Anfield, and the Spaniard has gone on to win a host of honours with Real Madrid and Bayern Munich, as well as the World Cup and two European Championships with his country.

Alonso will play the final match of a sensational career on Saturday when Bayern host Freiburg in the Bundesliga, and Gerrard paid tribute to the 35-year-old in a heartfelt message.

Steven Gerrard sends special message to Xabi Alonso ahead of his last ever game on Saturday pic.twitter.com/ZqplKDnL4z