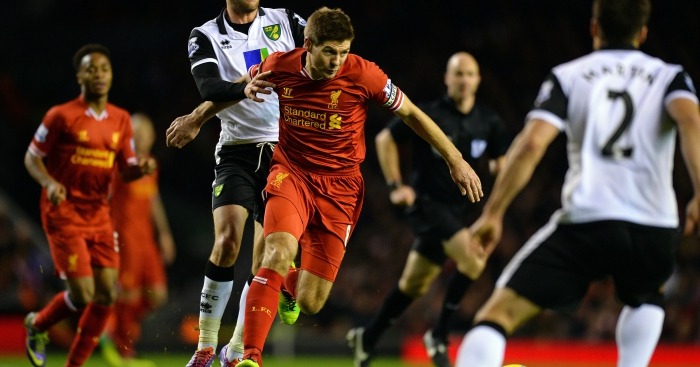 Steven Gerrard scored plenty of brilliant goals and provided numerous moments of inspiration for Liverpool – but we were cruelly robbed of an outrageous moment of improvisation by the post in December 2013.

Norwich were the visitors to Anfield and lined up with John Ruddy, who must still have nightmares to this day about facing Liverpool, in goal.

Luis Suarez grabbed the headlines that day with four goals in a 5-1 victory for the Reds, including a ludicrous 40-yard effort.

But Gerrard almost scored an even more outrageous goal, spinning with his back to goal to flick the ball with his left foot onto the post from the edge of the box.

If you’re not convinced by the first angle, the second suggests the Liverpool skipper knew what he was doing.