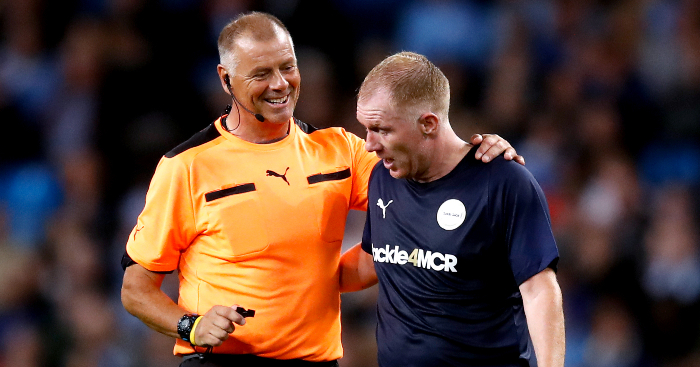 Paul Scholes’ inability to tackle was always one of the great watching-football-in-the-pub-stock-lines, and he reminded us why in Vincent Kompany’s testimonial.

The former Manchester United midfielder was turning out for a Premier League all-star team, against a Manchester City legends side in the friendly.

As well as showing off his ludicrous technique, the 44-year-old also showed the other side of his game. It sounds like Samir Nasri must’ve annoyed him, given the couple of hacks he dished out.

“Of course I can tackle,” Scholes told Five Live back in 2011. “There’s plenty of evidence of me being able to tackle. I was just getting people back.

Paul Scholes is still dishing out the challenges at the Etihad…🔥👀 pic.twitter.com/EwA0fDhnw8

Watch: All the goals as Man City Legends draw 2-2 with Premier League All-Stars