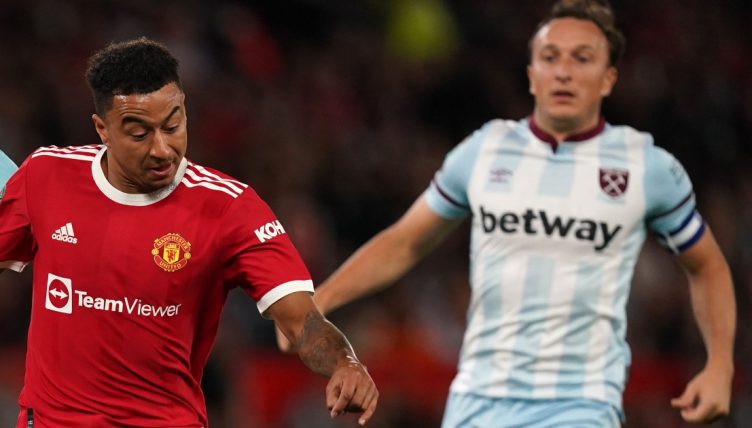 Three days after Manchester United‘s dramatic 2-1 victory over West Ham in the Premier League, the two sides are facing off again in the League Cup.

And it was two of Sunday’s key men were involved in one of the first half’s major talking points once again – Jesse Lingard and Mark Noble.

David Moyes’ Hammers went into the break with a 1-0 lead, but they were perhaps a little fortunate to do so after a strong penalty appeal was waved away. With no VAR in this competition, there was no second look.

It was Lingard that scored the late match-winner against West Ham, where he did so well on loan last season, while Noble – brought on by Moyes to take a last-minute penalty – missed his chance to cancel out, seeing his spot-kick denied by a good save by David de Gea.

And there was potentially more penalty drama involving Noble, who pulled Lingard down by the shorts as he burst into the penalty area. The West Ham skipper can breathe a sigh of relief that the referee waved away his former team-mate’s appeal.

Mark Noble trying to get his revenge on Lingard 😭 pic.twitter.com/errS09nngi