Watch: All the goals as Liverpool thrash Bayern Munich in Germany 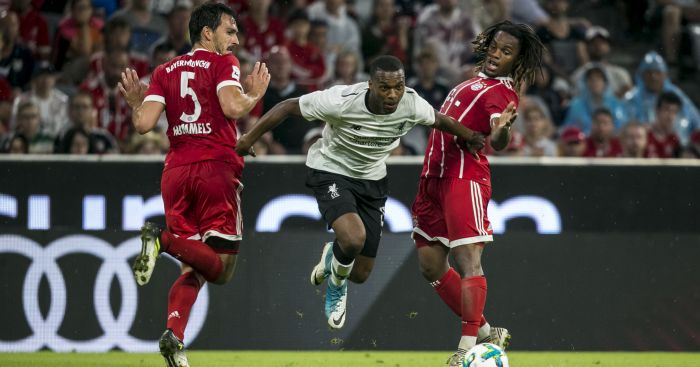 Daniel Sturridge scored a wonderful goal before limping off injured as Liverpool comfortably beat Bayern Munich 3-0 in their Audi Cup clash at the Allianz Arena.

Sadio Mane, who is still working his way back to full fitness after suffering a knee ligament injury in April, opened the scoring against Carlo Ancelotti’s men when Roberto Firmino slid him in behind Bayern’s defence and the Senegal international did the rest with an emphatic finish beyond Sven Ulreich.

Mane then turned provider on 35 minutes when he released Alberto Moreno whose cross from the byline found Mohamed Salah to head into the net.

GOAL!!! What a piece of skill from Mane in the build-up to Salah’s finish! Watch LIVE on ITV4 pic.twitter.com/oSrTeJ7jmw

However, the best was yet to come as Sturridge entered play on 67 minutes as a substitute to wrap up the match.

The England international latched onto a through ball from Ben Woodburn before lifting a perfect chip over the onrushing Ulreich.

GOAL! Sturridge scores a lovely chip but seems to injure himself in the process – watch live on ITV4 pic.twitter.com/MMCXkuptLl

In the process of scoring, Sturridge seemed to suffer a thigh inury and was swiftly taken off by manager Jurgen Klopp.

“I can’t say [the extent] but he hurt his thigh,” said Klopp. “He has prepared really well and I just hope it’s only a small injury and he can play again soon.

“His goal was really great and he had another chance before that. You could see how fast he is. It is a shame and I just hope it is nothing serious.”

The Reds will play Atletico Madrid in Wednesday’s final as they look to continue their unbeaten pre-season campaign.

Seven reasons Lucas will always be loved by Liverpool fans