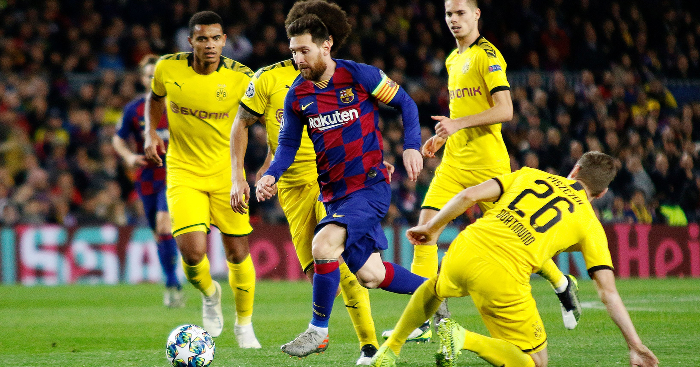 Lionel Messi put in a vintage performance in his 700th appearance for Barcelona, scoring one and setting up the other two in a 3-1 win over Borussia Dortmund.

The three points secured Barcelona’s passage to the knockout stages of the Champions League, but all anyone was talking about afterwards – as always – was Messi.

“Marking Messi tonight was almost impossible. He’s the best I’ve ever seen,” said Dortmund defender Mats Hummels after the game, and it’s not difficult to see why he thought that given the Argentinian’s performance.

There was one moment in particular midway through the second half which left us speechless when he pressed to win the ball back in his own half and somehow managed to wriggle free of two Dortmund midfielders before knocking it past a third.

Lionel Messi is a phenomenon.

He can’t be of this earth?! pic.twitter.com/mKeD9Xsi60

His assist for Luis Suarez:

His assist for Antoine Griezmann:

Lionel Messi putting a goal on a plate for Griezmann…