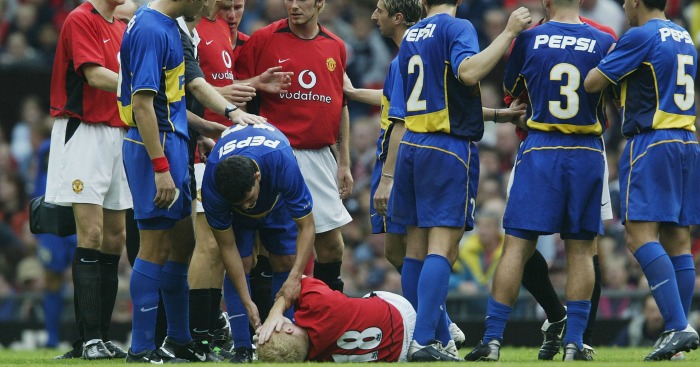 Manchester United and Carlos Tevez have endured something of a love-hate relationship – but it might date back earlier than you realised.

Tevez became a favourite at Old Trafford during his two-year spell as a United player, winning two league titles and a Champions League as part of Sir Alex Ferguson’s side.

However, the Argentina striker quickly became a villain in the red half of Manchester after leaving for fierce rivals City in 2009.

And Tevez was already used to being the pantomime villain at the Theatre of Dreams following a red card in a pre-season friendly in 2002.

After taking objection to what you might call a typical Paul Scholes tackle, Tevez – just a teenager at the time – saw red for an elbow on the midfielder.

The fiery attacker explained his challenge, rather excellently: “Scholes is not a fair player. He kicked me twice and I regret what I did, but he is a dirty player.”

Watch highlights of the clash, which United won 2-0 thanks to a Ruud Van Nistelrooy brace, below – with the red card incident taking place around the 5:30 mark.

Still, Tevez did not hold a grudge against the former England international, declaring in 2015: “It gives me great pleasure to be able to say, I have played with Pirlo, but the best is Paul Scholes.”

Watch: When Cristiano Ronaldo and Frank Lampard enjoyed kicking each other