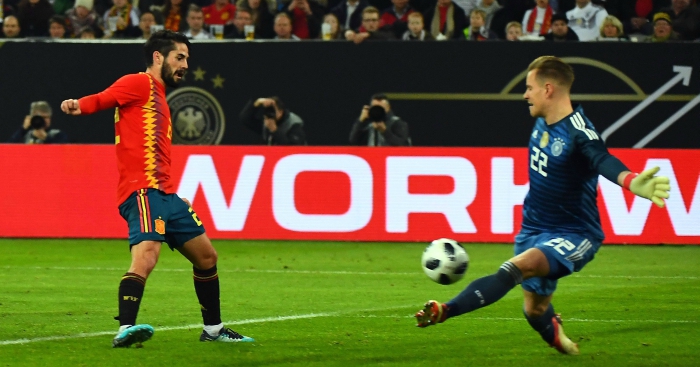 Valencia forward Rodrigo put Spain into an early lead before Thomas Muller levelled the scores with the two sides going in at the break locked at 1-1.

The game ended that way, but it could have all been different if both ‘keepers weren’t at their best – within seconds of each other.

First, Spain attacked in numbers and when Isco met a low centre six yards from goal, he looked certain to score.

However Ter Stegen made himself big, blocking the low effort with his leg with the rebound falling kindly for his defence.

With Spain committed to the attack, Germany broke, and through some excellent fast-paced play, found Timo Werner out wide.

His cross appeared to come to nothing with a huge chance wasted, but the ball eventually found its way to Ilkay Gundogan, who set aim from 20 yards.

His low effort looked set for the bottom corner, only for De Gea’s fingertips to flick it around the post.

Watch the brilliant passage of play in full below.

How different media rated England’s players in win over Netherlands

Can you name every team Ibrahimovic scored against for Manchester United?