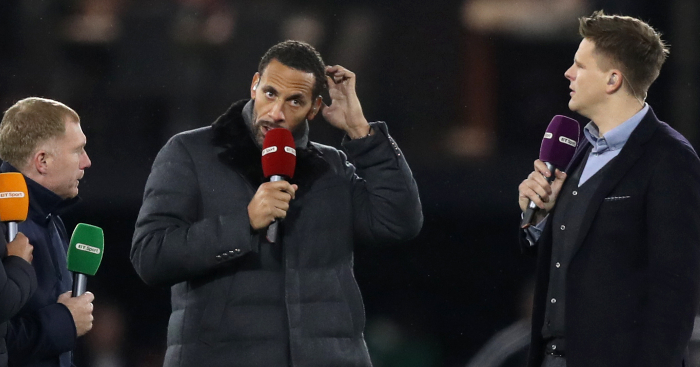 The former players, who made well over 1000 combined appearances for United, were starting to wind down their careers at Old Trafford as Pogba first started to breakthrough from the academy.

The Frenchman has made the headlines once again ahead of their all-important Champions League clash at RB Leipzig with claims from his agent Mino Raiola that he’s unhappy at the club and wants to leave.

Scholes had sympathy for his former team-mate, describing Pogba as “a good lad” and saying that he’s badly represented by the famously outspoken superagent Raiola.

Ferdinand levelled blame at the club for not nipping the situation in the bud, likening it to a situation between Wayne Rooney and Sir Alex Ferguson back in 2010.

Watch what they have to say below.

"I think the timing is disgusting. Ole, Woodward, how are you allowing an agent to talk like this?"

"Pogba needs to tell him to shut up, or sack him!"

A fascinating discussion between @rioferdy5 and Paul Scholes on Mino Raiola's comments about Paul Pogba 🗣 pic.twitter.com/V3FLmfLSGg