Watch: Thiago cries after being ruled out of Liverpool’s League Cup final 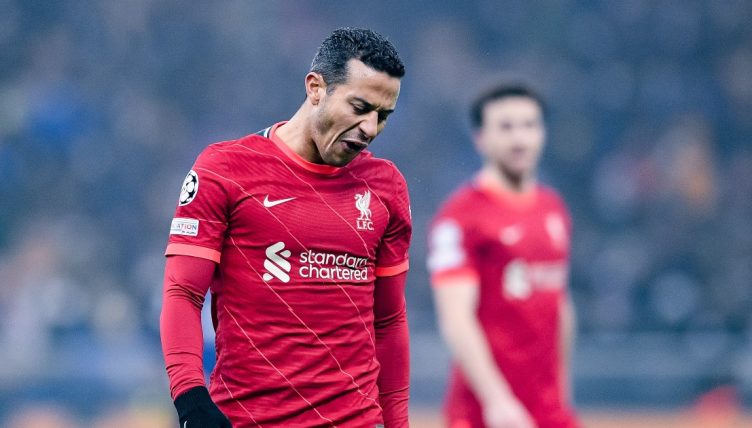 Liverpool’s Thiago was in tears at the start of the League Cup final with Chelsea after he was ruled out of the match in the warm-up.

Thiago was due to start the match at Wembley, but his injury in the warm-up meant he had to be replaced in the last minute.

He was replaced by Naby Keita in the midfield, who lined up alongside Jordan Henderson and Fabinho in Liverpool’s midfield three.

Thiago was in tears as the pre-match ceremonies got underway before the match kicked off, but he was comforted by Allison who was also not starting.

The Brazilian put his arm around the Spaniard and spoke to him, although Thiago was visibly still upset.

The midfielder has not won a trophy since joining Liverpool in 2020 after they had won their first Premier League title and has struggled with fitness issues throughout his Anfield stint.

He joined from Bayern Munich for around £20million after seven successful seasons in Bavaria.

Now 30, he has impressed when fit for Liverpool but has not always been available for selection.

“We all agree, and Thiago agrees, there were moments when he struggled injury-wise,” Klopp said recently about the Spanish international.

“He is a very, very good player, we were never in doubt about that, his skillset is insane but it is all about staying fit and that’s what we are working on together.”

How frustrating for the German manager, then, that one of his best players in recent weeks pulled up injured during training.

😢 Thiago Alcântara in tears after suffering an injury in the warm-up for Liverpool pic.twitter.com/eNEylkX2r1