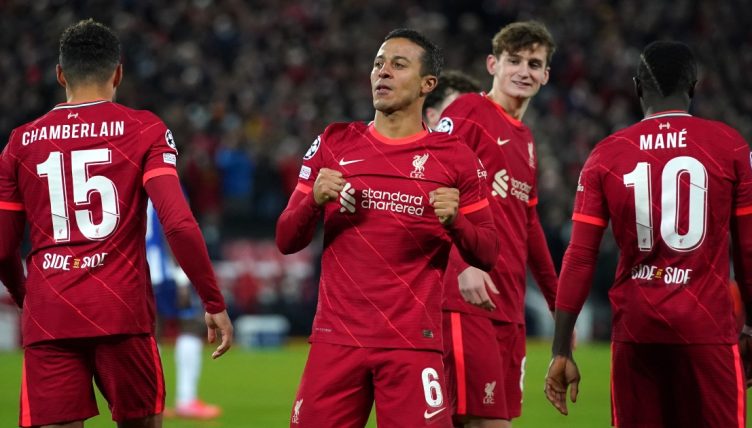 Thiago, who joined Liverpool from Bayern Munich in the summer of 2020, is renowned for his brilliant passing range and technical ability.

The Spain international endured a difficult debut campaign at Anfield but has shown glimpses of his best form this season, scoring an outrageous goal in their Champions League win over Porto.

But he recently spent seven weeks on the sidelines due to a hip injury before returning to the team for their FA Cup win over Cardiff City.

During a recent training session, Thiago channelled his inner Eric Cantona and produced an outrageous effort that looped over Adrian and into the back of the net.

Assistant manager Pep Lijnders sunk to his knees in disbelief and Alex Oxlade-Chamberlain celebrated by picking up the goalscorer.

“He has great vision and can change things with his passing,” Jurgen Klopp said when asked about Thiago in September 2021.

“In a closed area with his passing he is really good, and he can chip balls into each area like a golfer, actually. A good golfer. A world class golfer! He does that without even thinking.

Thiago was named in the starting Xi for Liverpool’s game against Leicester City and Kasper Schmeichel will have to be wary when he gets near the penalty area.

Where are they now? Klopp’s second string Liverpool FA Cup XI from 2016