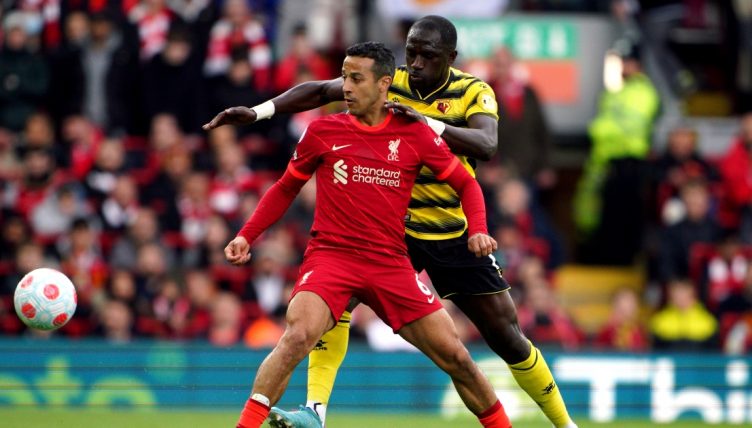 After a difficult start to his Liverpool career, Thiago Alcantara is now starting to show why he is regarded as one of the best midfielders in the world.

Thiago joined Liverpool from Bayern Munich in the summer of 2020 and initially struggled to adapt to English football in a difficult debut season.

Despite struggling with injury problems, he’s rediscovered his best form this season as Liverpool push for a historic quadruple.

The Spain international produced a Man of the Match performance in their 2-0 win against Watford, helping Jurgen Klopp’s side keep the pressure on league leaders Manchester City.

He recorded an 85% pass accuracy, created three chances, won five tackles and made two interceptions against Roy Hodgson’s side.

During the first half at Anfield, Thiago also stunned the Liverpool fans with a brilliant no-look pass that picked out team-mate Curtis Jones.

“Haha, yeah he probably wants to be a Bentley, rather than a Rolls Royce, so he’s a bit quicker,” Klopp said after talkSPORT host Jim White called Thiago a Rolls Royce of a player. “But no, he’s an outstanding player – wow.

“I knew that when he arrived here, of course. He was unlucky with injuries and stuff like this at the start, but when he is fit he can give the game a real rhythm.

“He’s got an eye for that, he calms the game down in the right moments, he has a sensational overview of the game.

“I saw that a lot in football games, too, I just didn’t have the feet to use it. So thank God he does!

“I can imagine you enjoyed it, I did as well.”