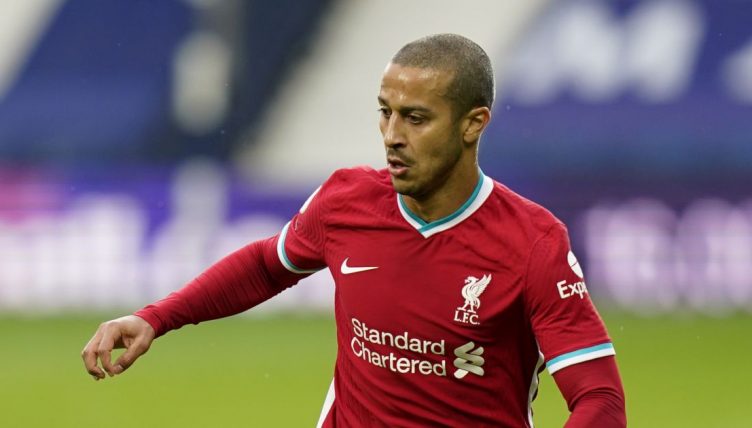 Thiago was incredibly relieved after Liverpool kept their Champions League qualification hopes alive with a late goal in their 2-1 win against West Brom.

After Hal Robson-Kanu gave relegated West Brom a surprise lead, Mohamed Salah stepped up for the Reds and netted the equaliser.

West Brom had a goal controversially ruled out by VAR before Alisson came up for a corner and headed past Sam Johnstone in injury time.

The win means Liverpool just need to win their last two games to finish in the top four, and Thiago dropped to his knees and punched the air when the referee blew the full-time whistle.

“We have to watch and re-watch that goal because it’s so emotional for us, not just for our Champions League chances but for Alli with what we has been through this year, so we are so happy for him,” Thiago said after the game.

“He’s a beloved team-mate for all of us. He has faced it with a strength I have never seen in my life.

“I’ve been in many great teams with many great forwards but I’ve never seen the quality and timing of the header from Alli, the cross was amazing as well, everything was great.

“I have never seen anything like that – we have watched goalkeepers score these kinds of goals but never seen it for myself. Happy with our performance but so happy for him.”

What it meant to @Thiago6 👊 pic.twitter.com/UKh6xSQaEY