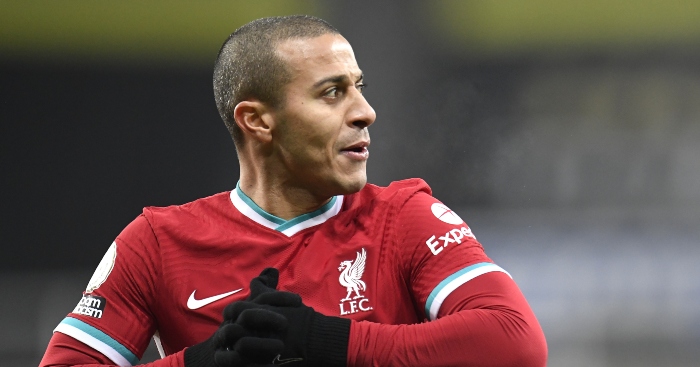 Despite only playing 45 minutes in Liverpool‘s 4-1 with over Aston Villa, Thiago still had plenty of time to showcase his incredible skills.

With the scores level at 1-1 following Louie Barry’s equaliser, Jurgen Klopp decided to replace Jordan Henderson with Thiago at half-time.

The 29-year-old made an immediate impact at Villa Park, dictating the tempo of the game and providing the creative spark that had been missing in the first half.

After Georginio Wijnaldum restored Liverpool’s lead, the Spain international picked out Xherdan Shaqiri with a brilliant no-look pass and Mo Salah then made it 3-1.

He produced another no-look pass moments later, juggling the ball on his knee before scooping it behind him and finding Fabinho.

Liverpool may have not been at their best in recent weeks but a fully-fit Thiago looks like he’s going to make a huge impact.

Watch: Liverpool’s Thiago skips past defender with an outrageous roulette