Watch: Thiago takes the p*ss out of Arjen Robben in Bayern training 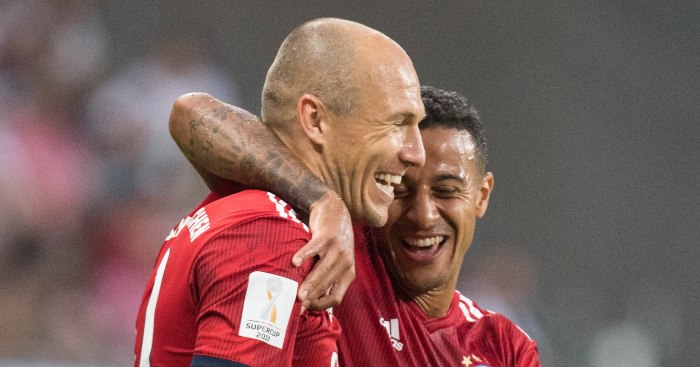 Liverpool fans are getting extremely excited about the imminent arrival of Thiago Alcantara, but their players could be excused for feeling slightly apprehensive about facing the midfielder in training.

After a summer in which plenty of doubts were expressed about whether Liverpool were genuinely interested in Thiago, a breakthrough was made on Monday when it became apparent a deal is very much on the cards.

Liverpool are reportedly set to pay €30million to sign the Spain international, whose seven trophy-laden years at Bayern Munich will end with last season’s treble.

The 29-year-old’s class is undoubted, as Arjen Robben used to find out on a daily basis in Bayern training. One clip has resurfaced online of Robben facing off against Thiago in a one-v-one battle at Bayern and, well, it’s safe to say the winger came off second best.

Not only was Thiago more than capable of stopping Robben, but he also showed the Netherlands international that he has some quick feet of his own. And as for some of the finishes, well, that’s just filth.

Still, if it’s this tough having to face Thiago in training, just imagine how tough it is to face him in a proper match.

Thiago vs Robben in training, look at the sauce. pic.twitter.com/yf4ZSJTnrv