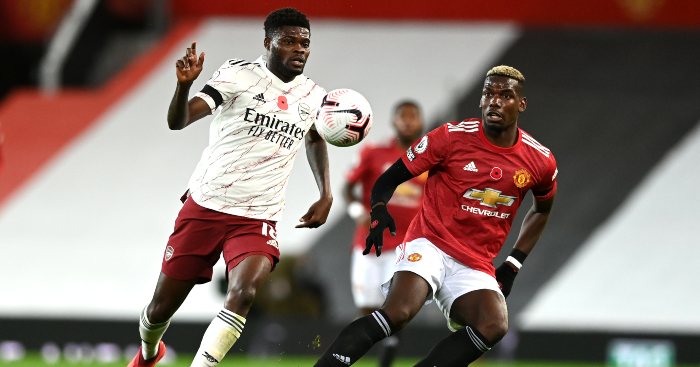 If you had to show one clip of Thomas Partey to sum up what Arsenal fans are hoping the former Atletico Madrid midfielder will bring to the club, show this.

Holding midfield has been considered a problem position at Arsenal ever since Gilberto Silva left the club in 2008 – so much so we even asked the man himself why the Gunners have struggled to replace him.

Partey is the latest player to attempt to fill that particular void after arriving in a £45million deal from Atletico Madrid on transfer deadline day.

Not only does the 27-year-old possess the obvious physical attributes to shine in the position, but – more importantly – he also has the technique and intelligence to shine both in and out of possession, meaning he made five ball recoveries in the first 15 minutes alone.

The Ghana international showed that perfectly in one first-half moment, reading Fred’s pass to intercept before rubbing salt in the Brazilian’s wounds by nutmegging him on the way to launching a counter-attack.

That sound you can hear is Arsenal fans collectively putting a cushion over their laps.