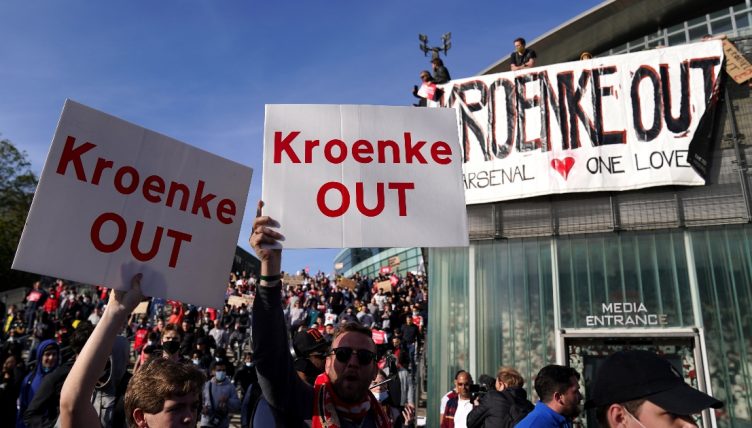 Arsenal may have withdrawn from plans for the proposed European Super League, and apologised to the club’s supporters, but that hasn’t appeased their incensed fans.

The controversial plans for the breakaway competition appears to have sparked a new wave of fan unrest, with Manchester United supporters disrupting training at Carrington the other day before thousands of Arsenal fans descended outside The Emirates ahead of the Friday night clash with Everton.

The message was clear: Kroenke Out. Gunners legend Ian Wright took to social media to echo the calls from the supporters, who lit flares and fireworks and came equipped with signs and protest banners.

Here are some of the best pictures and videos from various journalists on the scene.

Still going strong. Police seem to have shut off the routes in now to stop anyone else joining. I had to beg to get through just so I could get in for kick-off. pic.twitter.com/nz08MSwvb1

Loads and loads of fireworks now exploding all around the stadium.

This sign at the Arsenal protests hits hard 💥 pic.twitter.com/oVq91Mj6xm