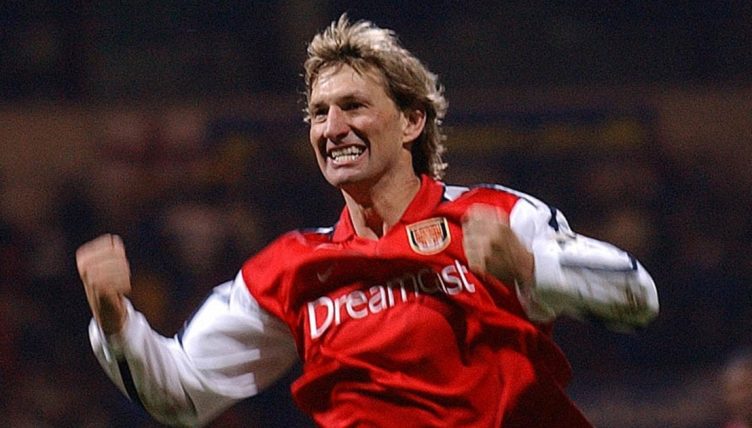 Tony Adams was in a brilliant mood after Arsenal stormed into a 3-0 lead against Tottenham in the north London derby.

Emile Smith Rowe broke the deadlock in the 12th minute before Pierre-Emerick Aubameyang and Bukayo Saka extended Arsenal’s lead before the break.

Adams, who made over 600 appearances for the Gunners, appeared on punditry duty for Sky Sports and looked delighted at half-time but Spurs icon and fellow pundit Ledley King was far from happy.

“It was a wonderful, wonderful first half display, the kids were phenomenal,” Adams said after the game. “Saka, the legs of Emile Smith Rowe up and back, they really took the game.

“I loved Tomi [Takehiro Tomiyasu], I thought his positioning was excellent. I thought they were exceptional all over the pitch and the game was over in the first half.

“I just liked the shape, the two holding midfielders [Thomas Partey and Granit Xhaka], they won every header, Ben White was exceptional today, imposing himself in the first 15 to 20 minutes.

“I’m excited. I’ve been saying for ages these guys need to hold these full-backs in and be hard to beat and let the Saka and Smith Rowe’s handle it and I’m delighted the kids took it to them.”

Adams wasn’t the only Gunners icon loving the action on Sunday as Ian Wright wildly celebrated all of the first-half goals.

Tony Adams is buzzing in the studio 🤣🔴 pic.twitter.com/D92mVkoOlz