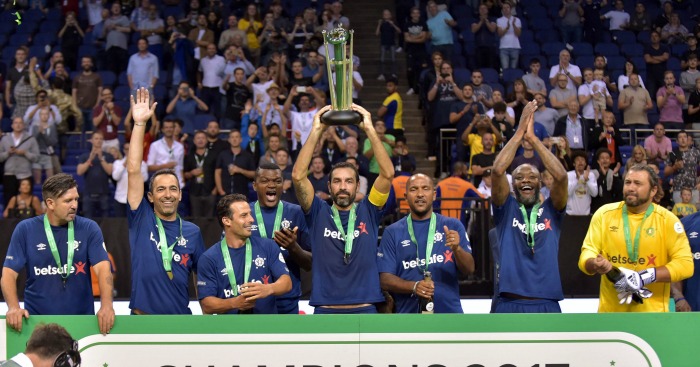 France came out victorious in the inaugural Star Sixes tournament – but the best goal award went to a one-time Arsenal striker turning out for Brazil.

Taking place at the O2 Arena in London, 12 countries competed in the six-a-side tournament which featured a host of legends including Rivaldo, Jay-Jay Okocha and Alessandro Del Piero.

France went on to win the competition, beating Denmark 2-1 in the final thanks to goals from Ludovic Giuly and Youri Djorkaeff, and the whole tournament was as entertaining as initially hoped.

Our favourite highlight came from Deco imploring the referee to book an opposition player by waving an imaginary yellow card, showing that the competitive spirit still remains.

There were also a number of brilliant goals scored, and Soccer AM have compiled the top five, featuring lovely Juninho and his lovely dribbling, plus a moment of inspiration from Eric Abidal.

In another highlight, treat yourself to watching Robert Pires sitting Carles Puyol on his arse on repeat.