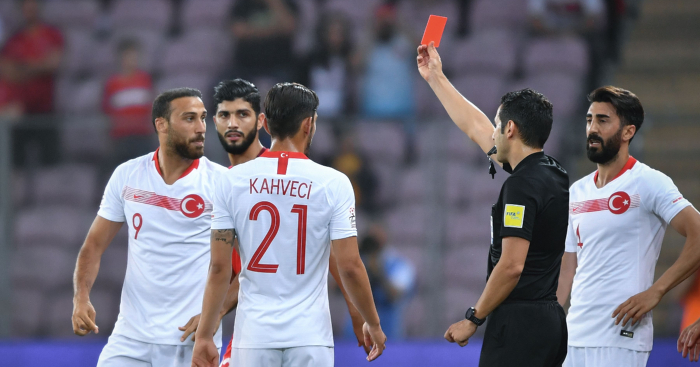 Everton striker Cenk Tosun was sent off for Turkey on Friday night after confronting fans who had reportedly attacked his father in the stands.

Turkey faced Tunisia on Friday night at the Stade de Geneve in Switzerland in a game which ultimately ended in a 2-2 draw.

Tosun opened the scoring himself with a penalty in in the 54th minute, only for Anice Badri to equalise two minutes later.

And Tosun’s night would not last much longer as the 26-year-old received a 59th-minute red card in bizarre and controversial circumstances.

This is why Cenk Tosun should be on penalty duty for Everton 🔵⚪️
Tosun Paşa has scored 3 goals in his last 2 games🇹🇷 pic.twitter.com/uNzBRIzAJF

Tosun was seen leaving the pitch to angrily confront supporters, with reports in Turkey suggesting fireworks had been thrown at the forward’s father.

The Everton man is understood to have been sent off after making a throat-slitting gesture towards the section of fans.