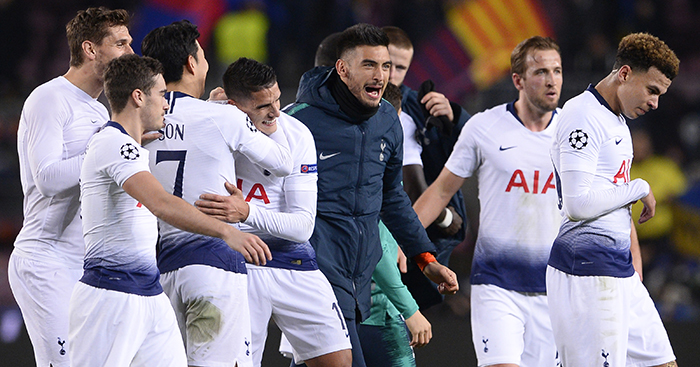 Tottenham progressed to the last 16 of the Champions League with a 1-1 draw at Barcelona on Tuesday night as Inter Milan were held at home by PSV Eindhoven.

Spurs knew they needed to match or better Inter’s result to make it through, but things did not get off to a good start when Ousmane Dembele put an under-strength Barca side ahead after just seven minutes.

PSV then took the lead in Milan to give Mauricio Pochettino’s side a boost, but Mauro Icardi equalised for Inter in the 73rd minute to put the Italians in pole position to finish as runners-up behind Barca.

However, Lucas Moura finally scored the goal Spurs had long been threatening when he converted Harry Kane’s cross five minutes from time – and not even the introduction of Lionel Messi could spoil the party in the away end as the north Londoners become only the eighth side to qualify from the group stage after claiming only one point from their first three games.

The players did not know that at the final whistle, of course, but they soon spotted their fans celebrating and were clearly desperate to join in as they endured pleasantries with the Barca players.