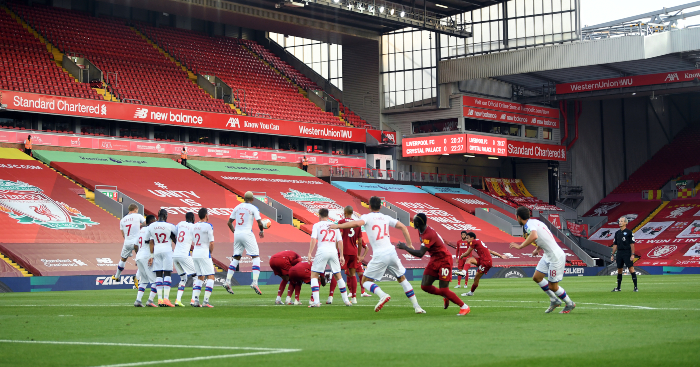 Trent Alexander-Arnold scored Liverpool‘s first goal since the Premier League’s restart with an outstanding free-kick to put his side ahead against Crystal Palace at Anfield on Wednesday.

Closing in on their first title in 30 years, Liverpool were frustrated in their first match back, drawing 0-0 with Everton in a drab Merseyside derby.

But the Reds started much more brightly against Roy Hodgson’s Palace, looking much more threatening from the off with Mo Salah back in the starting XI.

Yet it was right-back Alexander-Arnold who opened the scoring, arguing his case to step up and take a stunning free-kick past Wayne Hennessey in the Palace goal.

🎙️ "That was just pure quality."

What a free-kick from Alexander-Arnold! Hennessey has absolutely no chance!