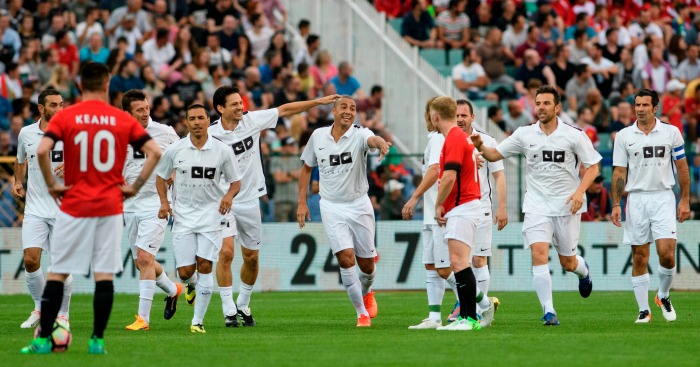 A team of Manchester United legends played out a 3-3 draw against an All Stars team captained by former Real Madrid legend Luis Figo on Wednesday – with ex-Juventus striker David Trezeguet scoring an outstanding volley.

The match took place in Sofia with the proceeds going to two children charities chosen by Figo and Dimitar Berbatov, who captained the United side in his home country.

Berbatov was joined by the likes of Ryan Giggs, Paul Scholes, Nemanja Vidic, Patrice Evra, Rio Ferdinand and Edwin van der Sar, plus compatriots and former team-mates from other clubs such as Hristo Stoichkov, Stylian Petrov and Robbie Keane.

Speaking ahead of the match, Berbatov said: “It will be the first time Bulgaria has seen so many huge stars in one place, brought together by the cause of charity. Together with them and with you who will come to the stadium, we will contribute to the better tomorrow.”

And the match certainly didn’t disappoint with goals aplenty, featuring an absolute peach from Trezeguet.