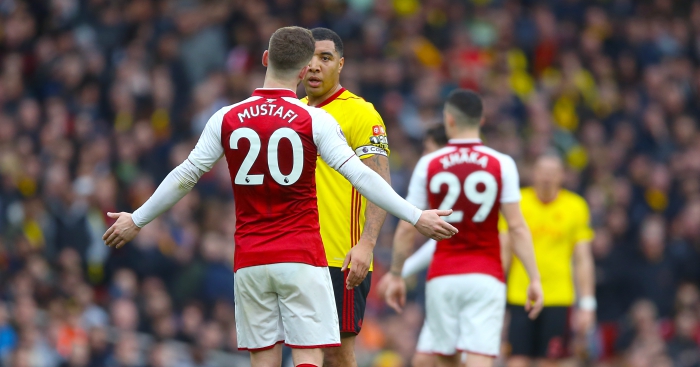 Troy Deeney may have upset Arsenal fans with his outspoken comments following their defeat to Watford, but the striker has no regrets.

Following Arsenal’s 2-1 loss at Vicarage Road in October, Deeney – who scored a penalty to level the scores – accused Arsene Wenger’s side of lacking “cojones”.

“Whenever I play Arsenal, I’ll go up and think, ‘Let me whack the first one and see who wants it,'” he told BT Sport. “I came on today and jumped with (Per) Mertesacker. I didn’t even have to jump, actually – I nodded it down.

“The crowd gets up – ‘Yeah, we’ve got somebody who can win it’ – and they all just backed off.

“For me as a player I just think, ‘Happy days.’ That’s my strength. I know I’m not technically gifted like they are, not as quick, but if you want to fight with me, I’m gonna beat you all day.”

In a brilliantly candid interview with XO, Deeney spoke about the reaction he received to his quotes.

“You get some Arsenal fans that obviously go, ‘Yeah, that’s what we’ve been saying for ages.’ Then you get the other guys saying, ‘How dare you speak about Arsenal?’

“I’m probably more qualified than most people to speak about them. We train next door in the same environment and I kind of know a lot about football. Not bigging myself up but I’ve played in more or less all the leagues and I know what it takes to get to that level.

“Granted, I’ve not been at the elite level. I grew up watching the Arsenals and Newcastles – big clubs that had four, five, six proper players there. And I just felt when we played Arsenal on that day I didn’t feel they had enough leaders on the pitch. That was it, I said my opinion.

“It’s actually helped Watford out because we’ve now got a rivalry with Arsenal.”

Troy Deeney: "Most fans see a different game to players. I am not being rude when I say that. Most fans will sit there and say he should be doing this or that, but they can’t do it and that is why they are fans." pic.twitter.com/OASNMaqDoD

In some respect Deeney’s comments came back to haunt him as he missed a penalty in Watford’s 3-0 defeat at the Emirates in March.

But the 29-year-old insists he revels in the Hornets’ new-found rivalry with Arsenal.

“We played there the other week, I missed the penalty and got loads of stick, which is actually good fun, I actually enjoyed it.

“If you look at Watford where we were when I joined seven years ago, we were 15th in the Championship. Fast forward seven years, and Arsenal, seven years from where they were to now, they’re now competing with Watford.

“Obviously my words have escalated it a little bit. But we’ve got to this point and I can say, ‘Yeah, I’ve done alright for myself there.’

“I spoke to Matiland-Niles after I missed the penalty. I just said, ‘I’m glad I can bring you out a decent crowd.’

“I remember watching the Wembley game when they lost 3-0 two weeks before to Man City, and then when the snow come when they had like 10,000 people there, for the next game against Watford it’s sold out and everyone’s giving Troy grief.

Despite attracting plenty of criticism himself, Deeney sees no reason to change his personality.

“It is what it is. It’s the way football is. If you take yourself too seriously you’re not going to last in this game.”

To hear more from the brilliantly honest interview, in which Deeney also opens up about playing drunk – “I was in a weird place at that point. I was drinking loads. I was going to Asda and buying Jack Daniels and coke in a can. I had about 10 of them a day, easy” – watch the video below.