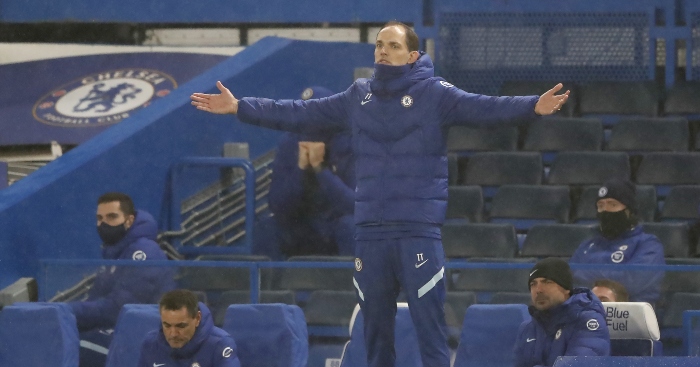 Thomas Tuchel was parachuted in as Chelsea manager this week following the sacking of Frank Lampard and was clearly still getting to grips with his new surroundings during Wednesday’s draw with Wolves.

After the sacking of Lampard on Monday, Tuchel was appointed Chelsea manager on Tuesday, meaning he only had one training session before his first Premier League match.

In these circumstances, it was understandable that Chelsea would be held to a 0-0 draw against stubborn opponents.

Tuchel’s antics on the touchline were often more entertaining than the match, and he was overheard before the game making an innocent faux pas with his new captain.

Marching onto the pitch during the pre-match warm-up, Tuchel called out for “Azpli” during a long-discussion with the Spanish defender.

Christian Pulisic, who played under Tuchel at Borussia Dortmund, shared a joke with Tuchel afterwards after correcting the German.

We’re sure that he’ll get there eventually.

Pulisic taunting Tuchel for mispronouncing Azpi by calling him "Azpli" 😂

A new father-son relationship has formed the Bridge. pic.twitter.com/G5p9c3kNKm