Watch: Tuchel gets Hudson-Odoi in a headlock after impressive Chelsea win 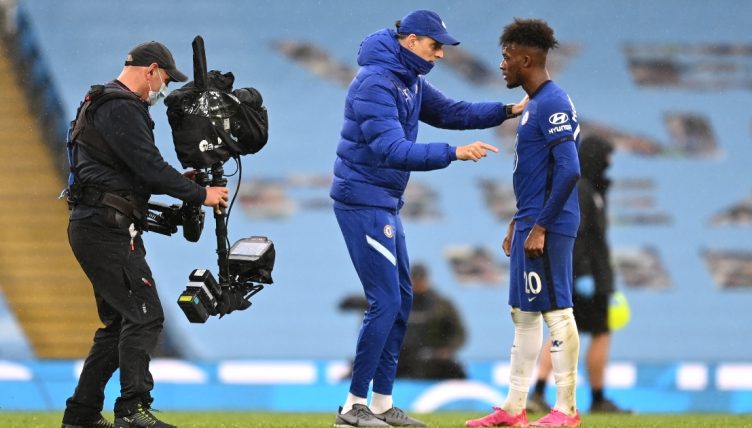 Chelsea‘s brilliant form under Thomas Tuchel continued on Saturday evening as the Blues came from behind to beat Manchester City 2-1 at the Etihad.

Pep Guardiola’s title party was pooped by the Londoners in a dress rehearsal of the Champions League final at the end of this month, with goals from Hakim Ziyech and Marcos Alonso cancelling out Raheem Sterling’s first-half strike.

Sergio Aguero wasted a golden opportunity to give the hosts a two-goal lead right before the break when he decided to try a panenka from the penalty spot, something that Edouard Mendy predicted.

Substitute Callum Hudson-Odoi thought he had won the game before Alonso’s goal when he tapped in from close range, only for the offside flag to be raised.

But Tuchel was still impressed with the winger and he was seen giving him a rather intense on-field lesson after the full-time whistle.

Afterwards, he grabbed his player in what can only be described as a happy headlock.

Tuchel got hold of Hudson Odoi at full time and then started coaching him, then after the talk, he headlocked him 😂 pic.twitter.com/c5FJi3IcUz