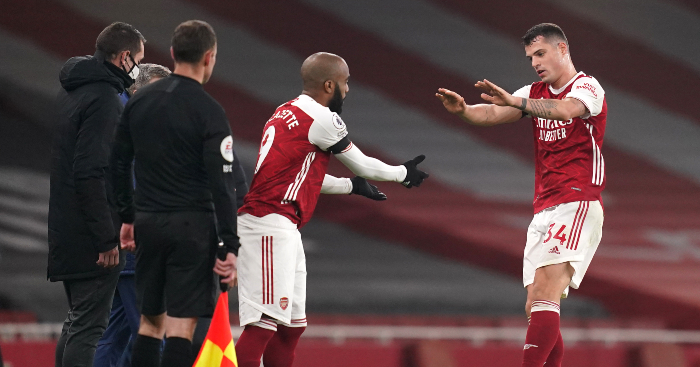 Granit Xhaka has rarely been one of the more popular figures at Arsenal, and the midfielder was once again the subject of criticism in the wake of the Gunners’ 2-1 defeat to Wolves.

Goals from Pedro Neto and Daniel Podence consigned Arsenal to their third consecutive home defeat in the league for just the second time since 1977. Worryingly, both have come in the last 12 months.

Xhaka himself enjoyed something of a resurgence under Arteta after his relationship with the fans had reached a toxic level under Emery, but the Switzerland international once more provoked the ire of supporters against Wolves.

The 28-year-old frustrated fans by passing backwards just as centre-back Gabriel Magalhaes threatened to break forward and launch a counter.

This is everything that is wrong with Arsenal. Gabriel intercepts the ball, looks to break out and Xhaka takes it off him and passes it 30yards back way. Absolute rubbish. pic.twitter.com/Kl6HySN2Z1

And Xhaka was also criticised for backing off on-rushing Adama Traore and allowing the Wolves winger to dribble to the edge of Arsenal’s box before playing in a team-mate.