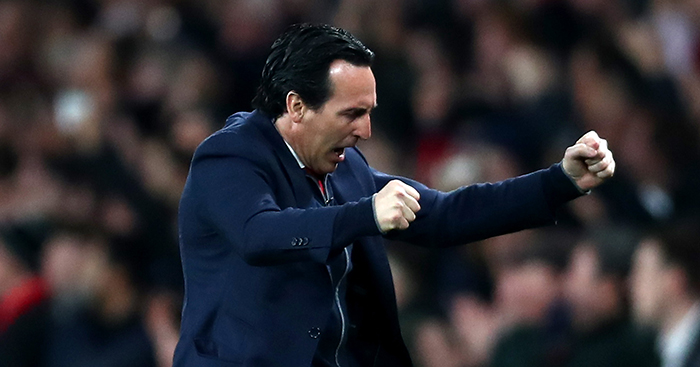 Arsenal beat BATE Borisov 3-0 at Emirates Stadium on Thursday night to make the last 16 of the Europa League – and you could see what it meant to Unai Emery.

Trailing 1-0 from the first leg, Arsenal levelled the tie within four minutes and then moved ahead six minutes before half-time when Shkodran Mustafi powerfully headed home from Granit Xhaka’s corner.

And Emery certainly saw the opportunity for his centre-back in advance, mimicking a header on the touchline then celebrating passionately as the ball hit the back of the net.

Sokratis Papastathopoulos headed in a third on the hour mark just four minutes after coming on to make things more comfortable and no doubt ease the nerves of a man who won the competition three years in a row with Sevilla.

Watch the brilliant moment he watched the second go in below.

Heads every ball…
Celebrates every goal…

Unai Emery wears his heart on his sleeve on the Arsenal touchline!