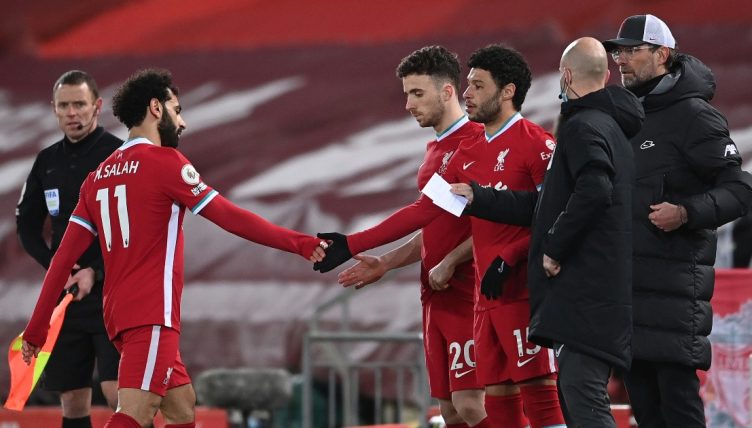 Liverpool‘s Mohamed Salah did not look at all pleased at being taken off in last night’s 1-0 defeat at home to Chelsea.

Salah was taken off alongside Curtis Jones just after the hour mark, with Jurgen Klopp sending on Alex Oxlade-Chamberlain and Diogo Jota in search of an equaliser against Thomas Tuchel’s Blues.

It didn’t work in the end as Chelsea held out for an eighth clean sheet from his 10 games in charge and moved four points clear of Liverpool into the top four in the process.

The decision to substitute the Egypt international inevitably dominated the post-match conversation, given he’s the Premier League’s top scorer with 17 goals, 10 more than anyone else in the Liverpool squad.

He did not look happy to be hooked, with a perplexed expression as he walked off before shaking his head on the bench.

“Salah not happy at being taken off. Shaking his head as walked to bench,” tweeted pitchside reporter Matt Critchley.

“But five mins ago Klopp was screaming at him to track back & help out defensively, he was a long way off. Bit of a half-hearted jog. Klopp turned to Ljinders almost straight away & they discussed replacing him.”

Klopp explained the decision, saying words to that effect in his post-match interview, while Sky Sports commentator Jamie Carragher couldn’t understand the decision.

Unreal Mentality from Salah here, hes just got that passion that cant be taught pic.twitter.com/HBfQGq2OBR

🗣 "He looked like he suffered a little bit, you're right I could've taken off Sadio or Bobby."

🗣 "I could not believe Salah came off." @Carra23 was baffled as to why Mo Salah was taken off when Liverpool needed a goal pic.twitter.com/M6IGTGRBIT