Watch: VAR orders players back onto field during HT after penalty awarded 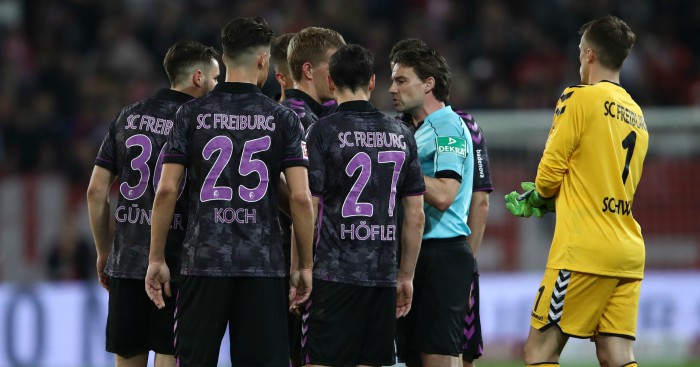 The introduction of VAR has been smooth, hasn’t it? Super smooth, no problems. None at all. Oh, sorry, what’s that?

Like it or loathe it, VAR has understandably had some bumps which need to be ironed out, but there was a unique moment as Mainz faced Freiburg in the Bundesliga.

Referee Guido Winkmann rejected Mainz’s appeal for a handball in the dying seconds of the first half and blew his whistle to signify the break.

Freiburg’s players retired to the changing rooms, only to be called back out after a delay of five minutes after the VAR official ruled it had in fact been a handball Marc-Oliver Kempf.

"I'm sure that is historic. I've never seen anything like it!"

Unprecedented scenes in Germany as VAR awarded a penalty after the half-time whistle had been blown 😮 pic.twitter.com/WxtEMhaXMJ

As if that wasn’t bizarre enough, Mainz then doubled their lead in the second half thanks to a hilarious error from goalkeeper Alexander Schwolow.

Even goalscorer De Blasis didn’t seem to know how to react.

This game has been an emotional rollercoaster… pic.twitter.com/phaAMH4vmP