Watch: Vinicius Jr. jumps over Real Madrid badge to avoid stepping on it 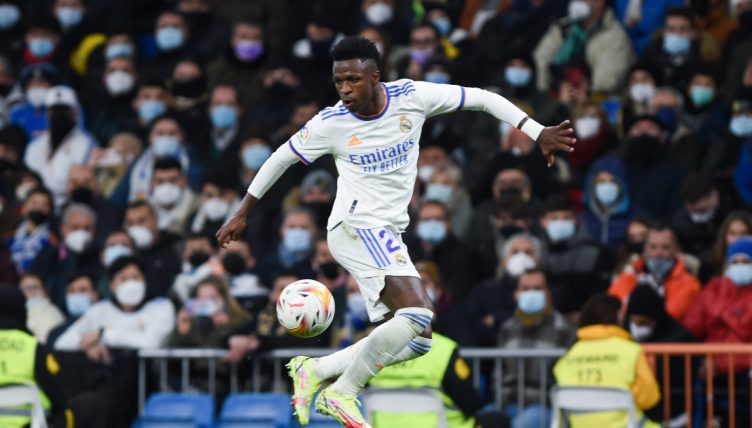 There are many ways to demonstrate your loyalty and respect for your football club and Vinicius Jr. demonstrated his respect for Real Madrid by going out of his way to avoid stepping on the badge.

During Madrid’s 4-1 win over Valencia at the Bernabeu, the ball ran out of play in the 80th minute when Vinicius Jr was chasing the ball.

Realising he was going to run straight over a large Real Madrid badge on the side of the pitch, Vinicius modified his run so that he could leap over the badge.

As if Real Madrid fans could love him anymore, the Brazil international also scored two goals on the night and helped the club extend their lead on the top of La Liga.

Vinicius has been in exceptional form this season, scoring 14 and recording nine assists across 26 matches in all competitions.

Along with Karim Benzema, who also scored two against Valencia, he has formed part of a deadly attacking partnership that has fired Real Madrid to a controlling position in the league and has found new life under Carlo Ancelotti.

“They are doing very well,” Ancelotti said after the match. “They are combining very well between then. I hope they can continue.”

Vinicius jumped because he didn’t want to step on the Real Madrid logo.