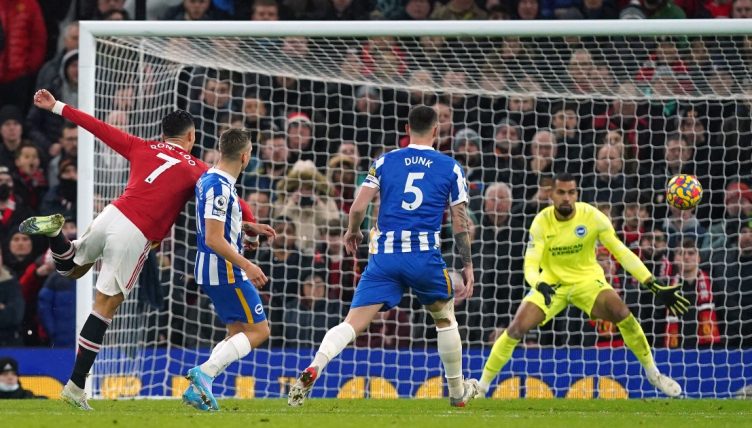 Manchester United’s Cristiano Ronaldo ended his goal drought in style with a brilliantly-taken effort against Brighton on Tuesday evening.

Ronaldo put United ahead in the early stages of the second half after an unconvincing performance from Ralf Rangnick’s men in the opening 45 minutes.

David de Gea produced a stunning save to deny the Seagulls and keep the game scoreless, while Ronaldo was probably responsible for United’s best moment in the opening 45 minutes with a brilliant backheel to set up Jadon Sancho.

However, with his side under pressure, 37-year-old Ronaldo rolled back the years in a bid to silence his doubters with his first goal of 2022, ending a six-match goalless streak.

The Portuguese had come under criticism for failing to find the back of the net as United dropped points in recent draws against Burnley and Southampton.

But he did brilliantly to pounce here, picking up the ball in a dangerous area after Brighton sloppily lost possession in their own half. Ronaldo ran straight at the Brighton backline and skipped past a challenge before unleashing a lethal strike past Seagulls keeper Robert Sanchez.

To make things even better for the Portuguese icon, only a matter of seconds earlier, his long-time rival Lionel Messi missed a penalty against Real Madrid in the Champions League.