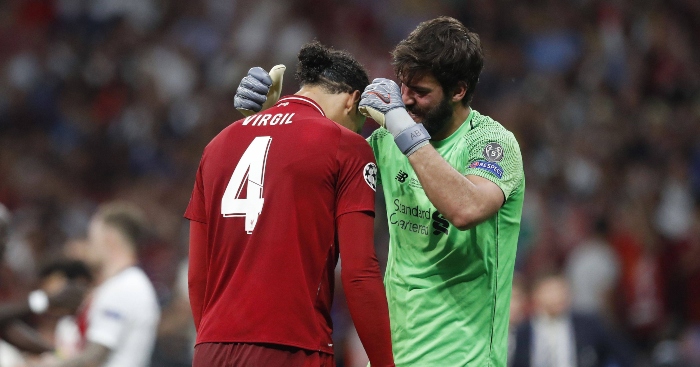 Alisson Becker and Virgil van Dijk have developed a telepathic bond on the pitch, and Liverpool‘s key defensive duo clearly enjoy each other’s company off the pitch.

The big-money signings of Alisson and Van Dijk have proved the missing pieces of the jigsaw for Jurgen Klopp at Anfield, helping transform the side into European champions and runaway Premier League leaders.

Liverpool needed the duo at the best in their key Champions League clash at RB Salzburg, knowing a defeat would see them knocked out of the competition.

Salzburg also had teenage sensation Erling Braut Haaland in attack, but Van Dijk and Alisson came out on top to keep a crucial clean sheet and set the platform for Naby Keita and Mo Salah’s goals to secure a 2-0 victory.

However, that didn’t stop Van Dijk trying to embarrass his team-mate in his post-match interview.

Van Dijk and Alisson bromance 👯‍♂️ is what we live for ! pic.twitter.com/qy8mpJSVnm