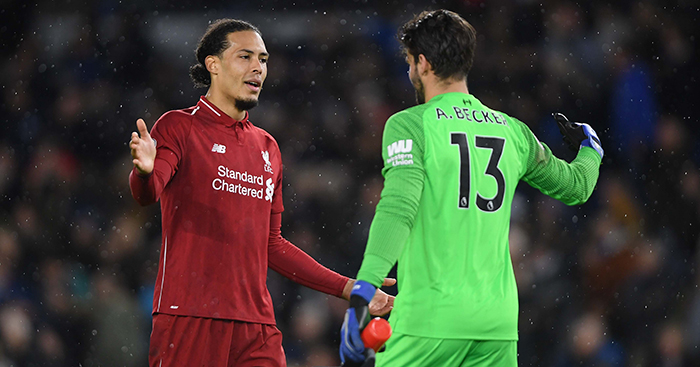 Liverpool‘s defensive record has improved significantly since they signed Virgil van Dijk last January – and his leadership skills were once again on display in the 1-0 win at Brighton.

Liverpool had lost their last two games going into the trip to the Amex Stadium and were far from their best on the south coast, but Mohamed Salah’s penalty proved enough for all three points as the Reds recorded yet another Premier League clean sheet.

It was their 50th in the league under Jurgen Klopp in 128 games – and a remarkable 37% of those (21) have come in the 37 games since Van Dijk joined from Southampton.

Liverpool were rarely troubled on the day, but the Dutchman was his typical imperious self when Brighton did attack, winning more aerial duels than any other player on the pitch.

But arguably an even greater strength of Van Dijk’s is the impact he has on his team-mates’ performances, and that was once again evident in the last minute of Saturday’s game when he amusingly became more and more animated attempting to get the attention of Trent Alexander-Arnold as he looked to organise the back line.