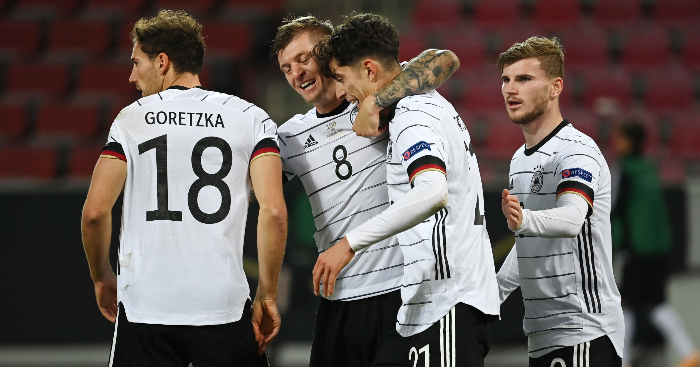 Chelsea boss Frank Lampard will have been pleased to see two of his new marquee summer signings on the scoresheet as Germany played out an entertaining 3-3 draw with Switzerland in the UEFA Nations League.

Germany were two goals down inside 26 minutes in Cologne as Atalanta’s Remo Freuler cheekily chipped Manuel Neuer for Switzerland’s second, but Chelsea duo Timo Werner and Kai Havertz got the hosts back on level terms either side of half-time.

The drama didn’t end there as Switzerland again took the lead in the 57th minute, before Bayern Munich’s Serge Gnabry – who lined up alongside Havertz and Werner in a front three – levelled things up, making it 3-3 on the night before a late red card for Newcastle’s Fabian Schar.

Werner gets Germany back into it:

Germany needed that – the Chelsea man gets them back in it!

Was a great goal scored by Kai Havertz today. pic.twitter.com/iLyDi3W1GZ

Seven stats from Havertz’s incredible 2020 with Leverkusen and Chelsea