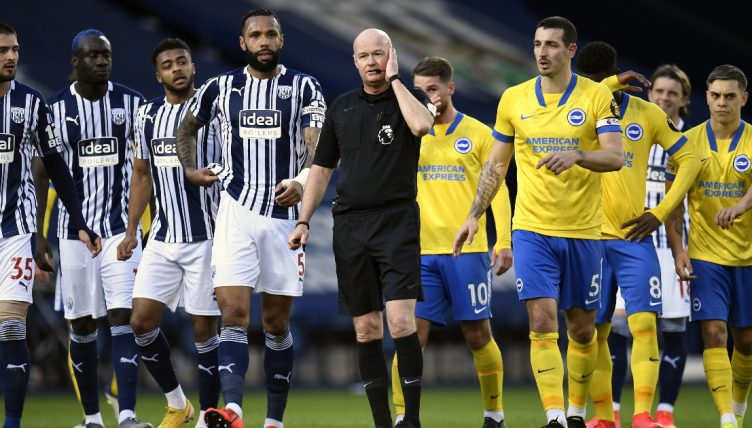 There was widespread confusion as West Brom took on Brighton on Saturday afternoon after a Lewis Dunk free-kick goal was disallowed, then given, then taken away again.

Referee Lee Mason appeared to have blown his whistle to allow the Brighton defender to take the free-kick, which he duly did, thinking quickly to catch Baggies keeper Sam Johnstone out before he was set.

But the match official quickly blew his whistle a second time as the ball was flying in, appearing to second guess his original decision to allow the quick free-kick.

Amid the furious reaction, with both sets of players remonstrating, Mason appeared to decide to allow the goal to stand, before eventually changing his mind again, going on to consult the VAR pitchside monitor before deciding once and for all to disallow Dunk’s effort.

In the end, the free-kick was re-taken, and Johnstone saved comfortably on the second occasion.

The understandably bewildered reaction in the Sky Sports Soccer Saturday studio is also worth watching:

🗣 "It's a total, utter, shameful, disgraceful piece of NONSENSE!"

Jeff and the boys CANNOT believe what they're seeing from the game between West Brom and Brighton! 👀😂