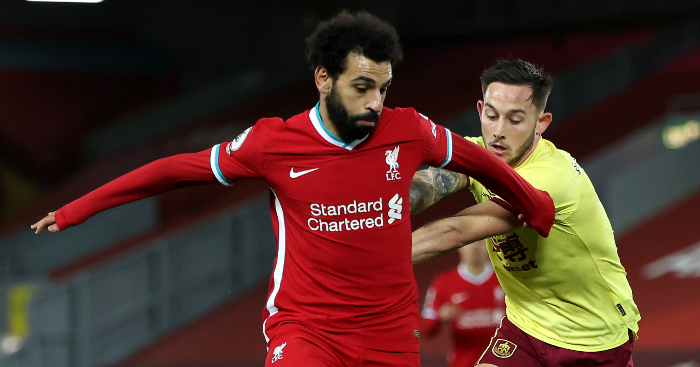 Liverpool struggled for creativity in last night’s 1-0 defeat to Burnley, but there was one inspired bit of play from Georginio Wijnaldum.

Trent Alexander-Arnold played 21 crosses on the night, but just one of those found a team-mate, as James Tarkowski and Ben Mee ably cleared away everything that was sent into the Burnley box.

The best chance of the game fell to Divock Origi after a mistake from Mee, but the best moment that Liverpool created themselves came via a wonderful, marauding run from Wijnaldum.

Picking up the ball from deep inside his own half, the Netherlands international skipped through midfield and was a joy to behold as he started to accelerate with the ball at his feet, finally opening up holes in Burnley’s organised backline.

Eventually arriving at the edge of the box, he might have been tempted to go himself, but instead he teed up Mohamed Salah, who connected well to strike on goal at the near post.

But Nick Pope did well to react and get in the way, causing Jamie Carragher to describe the Burnley keeper as England’s best shot-stopper. On this evidence we can’t disagree.

Watch: Divock Origi hits bar after being played through one on one v Burnley