Watch: Wilfried Zaha squares up to David Luiz after knee to face 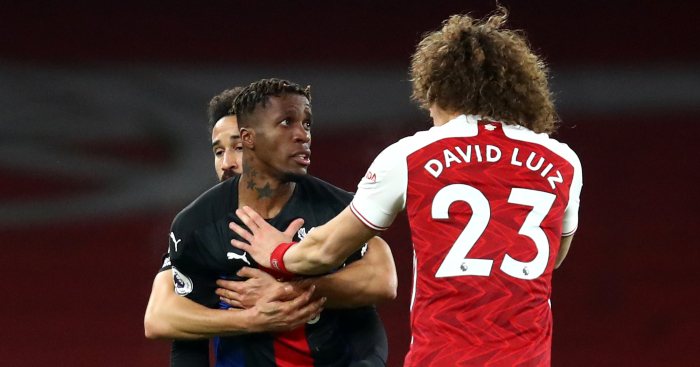 Wilfried Zaha and David Luiz provided an enjoyable running battle during Arsenal‘s 0-0 draw with Crystal Palace in the Premier League on Thursday night.

Arsenal went into the clash at the Emirates aiming for a fourth successive league win for the first time since 2018 but were left frustrated by Roy Hodgson’s Palace.

The Gunners were subdued in comparison to their more recent performances and Palace had the better of the chances, hitting the bar through James Tomkins and seeing Bernd Leno pull off a stunning save to deny Christian Benteke.

Zaha’s clash with Luiz did provide one flashpoint in the second half, as the winger reacted angrily to being caught in the face by the Brazilian’s knee.

The contact did appear accidental, although it came immediately after a robust challenge from Luiz, who was booked after Zaha did his best ‘hold me back’ routine with Andros Townsend.

Wilfried Zaha v David Luiz has been a great watch 🍿