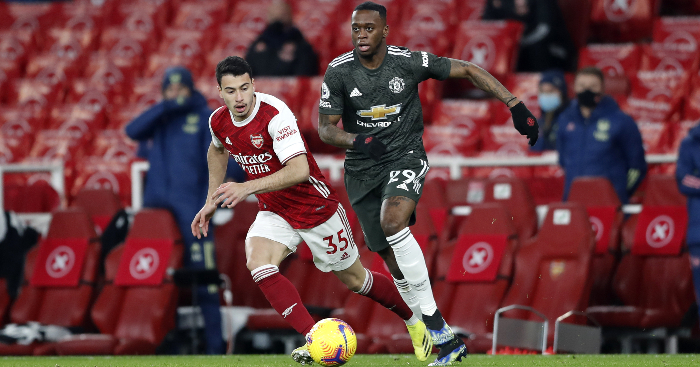 Manchester United and Arsenal clashed for the second time this season on Saturday evening as both sides looked to pick up a huge three points.

Mikel Arteta’s men are continuing their revival after an abysmal pre-Christmas spell saw them slip close to the relegation zone whilst United looked to breathe new life into their title challenge.

Defeat to Sheffield United in midweek saw the Red Devils slip down from top-spot, replaced by the other Manchester club, so a win on Saturday would do Ole Gunnar Solskjaer’s side a world of good.

But, as these occasions so often seem to, there was nothing to separate the two teams with a 0-0 draw the final outcome.

That, however, is largely down to a heroic block from United right-back Aaron Wan-Bissaka.

After initially misjudging the flight of Hector Bellerin’s cross, the ball drifted past Wan-Bissaka and to the feet of Willian – a man who badly needs a goal.

But the former Crystal Palace man was not feeling that generous, getting back to his feet impressively and flinging a leg in front of the Brazilian’s shot.