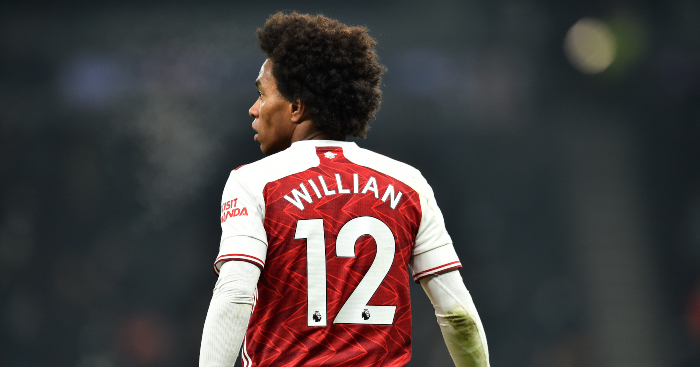 After seven trophy-laden years at Chelsea, Willian joined Arsenal on a free transfer in the summer, expected to add an element of nous and creativity to Mikel Arteta’s developing side.

Having been subbed off in Arsenal’s 2-0 extra-time victory over Newcastle United in the FA Cup on Saturday, Willian has now played 18 times for the Gunners in all competitions, recording zero goals and three assists in that time – two of which came on the opening day of the season.

Willian’s struggles have been exacerbated by the exciting emergence of Emile Smith Rowe, who came off the bench to open the scoring against the Magpies.

Arteta defended the 32-year-old after the match, telling reporters:  “He had some good moments and other moments where he needed more help. Some decisions weren’t the best but we’re going to keep trying with him. He’s showing in training how much he wants it.”

One moment in the second half shortly before he was replaced summed up Willian’s struggles. After Nicolas Pepe – another player struggling for form and confidence – did well to dribble his way out of pressure and pass to Willian out wide, the Brazilian sloppily gave the ball away and was subsequently nutmegged by Miguel Almiron to add insult to injury.

Despite being a fine servant for Chelsea over the years, things just aren’t clicking for Willian at the Emirates. We really hope he rediscovers his mojo, and fast.

Willian undoes all of Pepe’s hard work then proceeds to get nutmegged by Almiron pic.twitter.com/uezhDnH77C