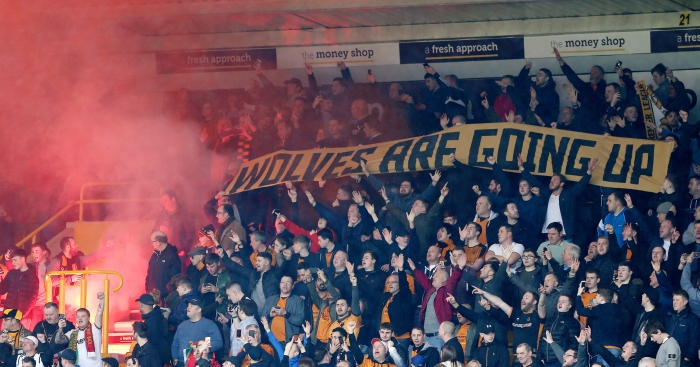 Wolves supporters did their best to rival the entrance handed by Liverpool on Tuesday night, ahead of their final home match in the Championship this season.

Nuno Esperito Santo’s side will lift the Championship trophy after their final home game with Sheffield Wednesday, which could see them pass 100 points for the season.

Wolves have been utterly unplayable this season in the second tier, and look set for an extremely positive return to the Premier League after relegation in 2012.

In that time, the club have dropped all the way to League One, and look set to hit the top flight with momentum after they were cleared of any wrongdoings over super agent Jorge Mendes’ involvement with the club.

And the supporters joined in with the side’s new European flair as they welcomed the team bus to Molineux ahead of the final home game.

There were smoke bombs, flags and scarves aplenty as the team bus pulled up outside, with joyous fans waiting to greet them.