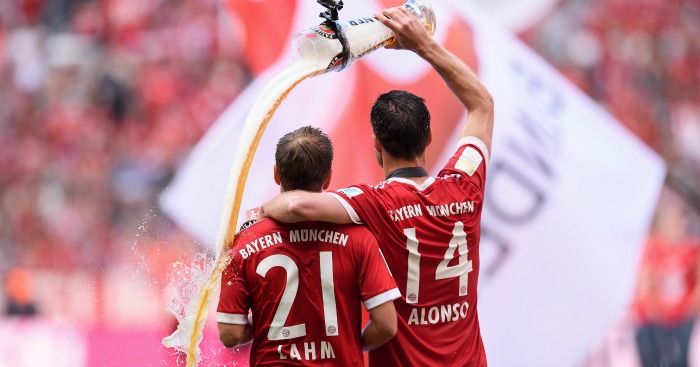 Xabi Alonso and Philipp Lahm were given fitting send-offs as both players made the final appearances of their respective careers in Bayern Munich’s 4-1 win over Freiburg.

Goals from Arjen Robben, Arturo Vidal, Franck Ribery and Joshua Kimmich ensured Bayern ended the season with a big win as they got to lift the Bundesliga trophy in front of their own fans.

But the day belonged to Alonso and Lahm, who between them have won 39 honours in their club and international careers.

“I definitely have mixed feelings at the moment, celebrating with the lads for the last time,” Lahm told Sky Deutschland

“It’s an emotional day. I’ve experienced so much.

“I’ve had the privilege to experience so much with the fans, the team. My friends and family are here and it was the very last time today.

“It was my life being on the pitch and I especially enjoyed the times together with the team and the staff.”

He added: “I am lucky to have been blessed by so many nice moments not just with the team but with the staff and the fans too. It was simply unbelievable.”

Both players were substituted late on, giving Bayern fans the chance to show their appreciation for two legends of the game.