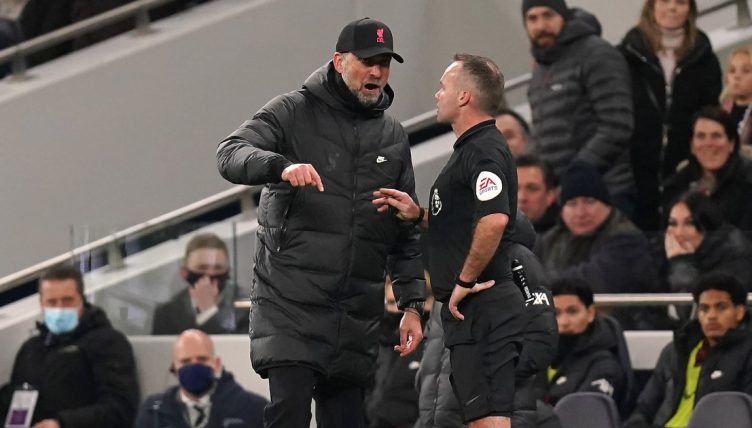 Jurgen Klopp made his frustrations with referee Paul Tierney clear at full-time after Liverpool’s 2-2 draw with Tottenham.

Harry Kane, who scored the opening goal of the game, was controversially shown a yellow card rather than a red card for his challenge on Andy Robertson.

Liverpool also felt that they should’ve been awarded a penalty when Diogo Jota was bundled to the floor by Tottenham’s Emerson Royal.

After voicing his frustrations on the touchline, Klopp was shown a yellow card and cheekily bowed to the referee.

The manager spoke to Tierney in the tunnel at half-time and wouldn’t have been too happy when Robertson was shown a red card in the second half.

After the full-time whistle, Klopp walked onto the pitch and publically vented his frustrations with the referee.

“Yes definitely,” Klopp told Sky Sports after being asked if Kane should have been sent off. “You can give Robbo a red card. It is not the smartest challenge but that is definitely a red card. No doubt about it.

“His leg was in the air, it was pure coincidence. Harry cannot judge it. If Robbo’s leg is on the ground it is a broken leg.

“We have a VAR sitting there and he thinks have a look again at Robertson again. Fine that’s what he is there for.

“But what did he do in that situation? And then there is the penalty situation with Diogo Jota. Mr Tierney told me Diogo stops on purpose because he wants the foul. First and foremost if you want to shoot you have to stop because you cannot do both.”

👀 Jurgen Klopp having a word with the referee in the tunnel before the second half after he lost his cool on the touchline pic.twitter.com/UU6RsXti3V

Audio from Jurgen Klopp's confrontation with referee Paul Tierney after the game pic.twitter.com/jkcx4slwRk