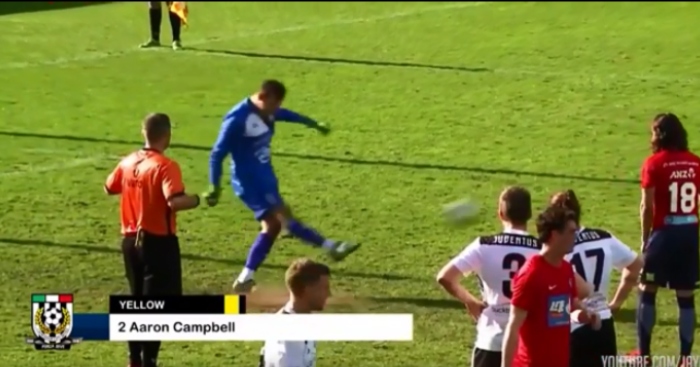 Being a goalkeeper can be a lonely task – not least when facing a penalty.

Knowing there’s just you between the ball and the goal, there’s the added pressure of the entire stadium focusing entirely on whether or not you can make a decisive contribution.

Some goalkeepers deal with this situation in different ways; Bruce Grobbelaar and Jerzy Dudek famously adopted jelly legs to inspire Liverpool to European Cup glory; Joe Hart screamed at Andrea Pirlo before being sat on his arse with a panenka; David Seaman was given a helping hand by Uri Geller to beat away Gary McAllister’s spot-kick at Euro 96 and pave the way for That Gazza Goal.

A clip which has recently surfaced on Reddit shows that Canadian stopper Niko Giantsopoulos opted for a very different tactic in August 2018.

Giantsopoulos was playing for Launceston City in the NPL Tasmanian, the second tier of Australian football, when South Hobart were awarded a penalty.

With the scores locked at 1-1, Giantsopoulos – aptly named for a goalkeeper – needed to do everything in his powers to prevent a goal.

Perhaps he’d just watched Peter Kay’s John Smith’s advert, which would go some way to explaining why he simply sprinted up to the ball waiting patiently on the penalty spot and hoofed it away with an emphatic ‘AVE IT before nonchalantly walking back to his goalline with the opposition striker completely baffled.

Did it work? See for yourself.