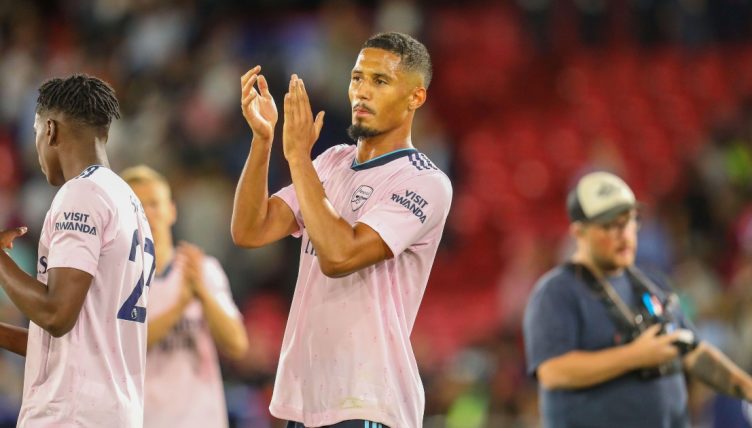 William Saliba marked his competitive Arsenal debut with a flawless performance as the Gunners beat Crystal Palace 2-0 at Selhurst Park.

Saliba agreed to join the Gunners in a £27million deal back in 2019 but has spent most of the last three seasons on loan at Saint-Etienne, Nice and Marseille.

The centre-back won the Ligue 1 Young Player of the Year award last season and is now going to be given a chance in the Arsenal first team.

He started alongside Gabriel against Palace and was named Man of the Match after making seven clearances and winning all of his aerial duels.

“We should have scored another one or two, we missed some chances and then, if you want to win here, you have to dig in. We had to play in moments, the game we don’t want to play.

“They put four very physical players on our last line and they had the ability to turn our press all the time. From there, you have to manage that game and that’s not easy to do because they are so good at doing that.”

One of Palace’s forwards was Wilfried Zaha, who has embarrassed a lot of Premier League defenders over the years.

The Ivory Coast international managed to skip past Ben White in the second half but Saliba then produced a perfectly clean tackle to thwart him inside the penalty area.

“Mikel and Edu have got to take a lot of credit for what they’ve done with this guy. This guy is someone we’ve always thought would be special.

“Even when they sent him out on loan there were fans calling for him to come back. He’s a full international now, he looks composed, calm, he’s got great pace.

“It’s a decision that was magnificent from Arsenal. It would have been easy to bring him back last year but they gave him the extra season and now he looks like he’s been playing in that position for years.

“At 21, to go to Crystal Palace for the first game of the season and play like that… you don’t want to get carried away but that’s some performance.”

This tackle Saliba to zaha. pic.twitter.com/uN2gjnzc8D